Skarloey, a narrow gauge saddletank engine, is the oldest engine on the Skarloey Railway.

Skarloey was built at Fletcher, Jennings, and Co., Whitehaven in 1864, along with his twin Talyllyn. He was originally built as a 0-4-0ST with no cab, which caused him to bounce a lot. He was the first engine to arrive on the newly developed Skarloey Railway in May, 1865. Skarloey arrived on Sodor by steam ship at Kirk Ronan Harbour, before being delivered to Crovan's Gate by Neil. His young antics proved bothersome but he soon matured when he was sent back to Whitehaven, in 1867, and received his cab and trailing wheels.

The trailing wheels improved his running greatly and this together with the cab made him a favourite with the men in spite of his shy steaming. In consequence Skarloey was always worked harder than Rheneas and in 1897 he returned to Whitehaven for a second and final time for heavy repairs. No further overhauls were done to him apart from general maintenance at the The Works. As a result by 1945 his boiler and firebox were in such a poor state that he could only be steamed in dire emergency. On one such occasion in 1952, he damaged his springs whilst bringing home Sir Handel's train, resulting in him receiving a much-needed overhaul.

He was sent to Gibbons Bros. Ltd. in England for this, where he met his twin Talyllyn, for the first time in some 60 years. He returned almost as good as new in 1958, but was still somewhat shy in steaming. After many experiments, however, Mr. Ivo Hugh finally cured this fault by fitting a brick arch in his firebox and a "Kylchap" cowl on his blast pipe. This work was done at the works at Crovan's Gate.

Since returning to service, he has been very much a voice of reason on the Skarloey Railway: he was responsible for Sir Handel's comeuppance when the latter became boastful about his new wheels, and changed Duncan's views about passengers by telling him about the time when Rheneas saved the Railway.

At the celebrations for his and Rheneas' 100th birthday, he collected the Duke of Sodor and took him around the new loop line. He underwent another heavy overhaul at Crovan's Gate Works in 1985, returning to service in May of that year.

He later attended Ivo Hugh's naming ceremony and brought along a special train with important guests. However, he had to stop when a sow and her piglets strayed onto the line. His passengers had to come out to catch the pigs and return them to their field and Skarloey was late but arrived in time for the naming ceremony.

Skarloey had an accident on the Old Wooden Bridge. This accident caused him to gain a fear of heights. However, when he had to rescue his friend Rheneas at the other side of the bridge, he managed to overcome his trauma of his near death experience and his fear of heights.

Skarloey has acted like a childish engine and has tried to prove his bravery by getting hauled up the winch on the incline and by having a race with Rheneas and Freddie. He has also acted timid, being scared of The Wharf and storms.

He once had to take an evening passenger train, but Duncan took his coaches so that The Grumpy Passenger would not complain about the train being crowded, but this only resulted in angering Skarloey and his stranded passengers. The next day, Skarloey was delayed by Duncan again when he refused to leave the platform until the same grumpy passenger had boarded his train. Later during the Christmas holidays, Skarloey was upset by Duncan's constant grumbling, so he, Rheneas and Rusty told Mr. Percival, who devised a plan to stop the grumpy engine from moaning all the time. 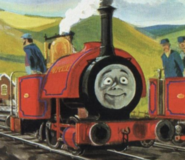 Skarloey without a cab 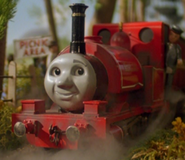 Skarloey with a cab
Add a photo to this gallery
Retrieved from "https://myislandofsodor.fandom.com/wiki/Skarloey?oldid=14401"
Community content is available under CC-BY-SA unless otherwise noted.