Rheneas was built by Fletcher, Jennings, and Co. at Whitehaven and arrived on the Skarloey Railway, in 1865, in time to haul the train carrying the Board of Trade Inspector.

Unlike Skarloey, Rheneas was stern and thoughtful and fell out with Skarloey after he called him a "stick-in-the-mud" following an argument over cabs. The two reconciled after Rheneas saved Skarloey from a landslide, 1867.

Rheneas’ long wheelbase enabled him to ride steadily, but it also made him hard on the track and this, together with the initial absence of a cab, made Skarloey the more heavily used of the two. Unlike Skarloey, Rheneas never returned to Whitehaven. Such repairs as were needed, including the fabrication of a cab at an unknown date, were done at the Skarloey Railway workshops. In 1937 and again in 1943, he was overhauled at the North Western Railway Works at Crovan's Gate.

Rheneas literally saved the railway by keeping service through a very lean period in the late 1940s. By 1945, Skarloey was in need of repairs, leaving Rheneas to run the line. He managed to pull a full train home one rainy day despite jammed valve gear and was rewarded with an overhaul. In 1952, he was sent to England for a heavy overhaul. While there, he was reunited with his twin Dolgoch. Money, however, was tight on both their railways and their repairs could not be completed immediately. His overhaul took place in 1961 and was returned to the Skarloey Railway soon after.

Rheneas, Skarloey, and Rusty were chased by Boulder when it had rolled off from its cliff. Rheneas' line did not have any points, so he was forced to try and outrun he did so, speeding across a viaduct and ended up derailing. The boulder passed by, which Rheneas' driver found preferable to getting squash

IN 2002, Rheneas had another overhaul completed. Rheneas, Skarloey, and Rusty have worked on the Skarloey Railway for each of their entire lives, but work at the quarry clashed with Rusty's maintenance work, causing the line to fall into disrepair and be shut down and forcing Rheneas and Skarloey to work at the quarry with Rusty. A period of blasting gave the engines two weeks to attempt to repair the line and Rheneas determinedly worked harder than ever with a hopeless Skarloey, a clever Rusty and an initially derisive Elizabeth. The railway was restored in the allotted time and the two tank engines were very happy at this turn of events.

Rheneas saved Skarloey from his state of dangling from a broken bridge. Because Skarloey was too scared to cross the bridge again, Rheneas would collect both of their trains every morning. Eventually, this caused Rheneas to run out of water right on the bridge. Skarloey forced himself to cross the bridge to save his best friend and Rheneas thanked him for his bravery.

When Mr. Percival needed two careful engines to transport a dinosaur skeleton to the Sodor Museum, Rheneas offered to have himself and Skarloey demonstrate how careful they can be. Rheneas did better than Skarloey, whose excitement got the better of him and offered to try again following the mishap. Mr. Percival gave him one last chance, so Rheneas decided to prove that he could take the dinosaur on his own. He did so by delivering a long and heavy line of coal trucks. He gained the job, but he could not make it up Culdee Fell Hill. Skarloey, still upset, found his way blocked and Rheneas apologised for what happened, declaring that he will always want the two of them to work together. This cheered up Skarloey and the two happily transported the skeleton the rest of the way.

Rheneas and Skarloey like to race each other and they challenged Freddie to a race to see who the fastest engines in the hills is. As Rheneas and Skarloey raced, their age did not hinder them, whereas Freddie's did, so right as they were about to catch up, they did not notice Freddie go a different way. Rheneas expressed his admiration at how fast Freddie supposedly went and the three of them raced again. Rheneas decided that they would race down the opposite, steeper side of the mountain. A determined Rheneas ended up derailing and rolling down a hill. Freddie used his knowledge of the old tracks to find Rheneas and helped him back onto the rails. Freddie apologised for cheating and admitted that Rheneas and Skarloey are much faster than him. Rheneas did not mind and instead wanted to hear about Freddie's tales of the old tracks.

Skarloey saved Rheneas from some logs tumbling down a hill, denting himself in the process. A grateful Rheneas noticed Skarloey's sad demeanour and asked what the matter was. Rheneas was surprised at Skarloey's fear of The Wharf, having heard from Rusty about Skarloey braving the old wooden bridge for him and the stream for Duncan and said that Skarloey is the bravest engine he knows. Rheneas also brought up how disastrous the log incident would have been for him had Skarloey not saved him.

Whilst working at the Blue Mountain Quarry, his paintwork was severely scraped after becoming a runaway; this was the result of having gone too fast over the collapsing Blondin Bridge. This resulted in the brief period when he was painted yellow with blue lining.

One Christmas, after hearing Thomas and Toby talk about Christmas trees, Rheneas decided to go to Misty Island to go tree hunting, but with the help of Toby and a well wagon due to the Island's standard gauge lines. Unfortunately, the gallant old engine constantly pressed Toby into going fast, scaring the tram into closing his eyes and zooming past any trees Rheneas saw. Ferdinand, Bash and Dash eventually helped them find a perfect tree in time for Christmas morning.

Rheneas in his red livery 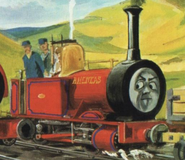 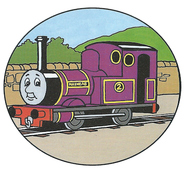 Rheneas painted purple
Add a photo to this gallery
Retrieved from "https://myislandofsodor.fandom.com/wiki/Rheneas?oldid=14320"
Community content is available under CC-BY-SA unless otherwise noted.