Oliver worked on the Great Western Railway. In 1967, he ran away for fear of being scrapped with his coach, Isabel, and a brakevan named Toad. The three were forced to hide between signalboxes and rely on the goodwill of signalmen to pass at safe times. When control got wind of the runaways, they hid in an old quarry branch and had the cutting blocked by rubbish to avoid being spotted by the Diesels outside. The runaways decided it was safe to leave at some point, but before they could reach the greener pastures of Sodor, Oliver ran out of coal, at Barrow Yard. Luckily, Douglas was able to rescue Oliver and hid him on a siding at Crovan's Gate. The Fat Controller soon found out and arranged for the three to be repaired and painted in Great Western colours. Toad decided to be Douglas' brakevan to thank him, which didn't last long as Toad missed Oliver dearly, and the Fat Controller rescued an autocoach named Dulcie and gave her to Oliver.

Oliver was then sent to work on the Tidmouth-Arlesburgh branch line, but became conceited after the big engines gave him their respect in recognition of his adventures and pushed his weight around, prompting several ballast trucks to push him into a turntable well. Oliver received little respect from the trucks after the incident, but got his own back by pulling the ringleader, S. C. Ruffey, apart. Oliver is now well-respected by the trucks, out of fear they will be pulled apart too. Oliver has since had a couple adventures, such as running Thomas' Branch Line during the engines' trip to England and discovering an abandoned house which was later turned into a tea-house.

He once broke down on the Intersection and was saved by Emily when he was about to be hit by Thomas. He also complained about the snow, then later crashed into a children's snowman in Rolf's Castle, in which he had to spend the night in the snowman's body. Oliver started repeatedly telling everyone about his "escape" from the scrapyard, even to the point of annoying Toad. After Toad had an adventure without him, James told Oliver to listen to Toad's story for once. During a flood, he collided with Rocky and James who were rescuing Duck, who had stalled underwater. He also nearly collided with Duck after Duck ran a red signal by mistake. Later, he broke down whilst on his way to the docks to deliver some trucks. When Gator arrived to take the train, Oliver was surprised by his unusual shape and wondered where Gator's lamp was, unaware it was not working properly.

When a storm struck the Island, Oliver and Duck were responsible for taking people safely home. At Arlesburgh, the two met Skiff and warned him to get to safety, upsetting the rail boat. When he had finished his jobs, Oliver picked up Toad and headed for home, however they nor Duck, who was travelling to Tidmouth on the opposite track, were aware that a lightning strike had caused a tree to fall on the line. Thankfully, Skiff, who had been blown away by the storm, was able to warn them just in time.

Oliver in his green livery 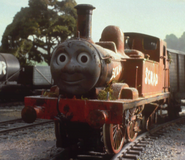 Oliver up for scrap
Add a photo to this gallery
Retrieved from "https://myislandofsodor.fandom.com/wiki/Oliver?oldid=14369"
Community content is available under CC-BY-SA unless otherwise noted.