Dolgoch was built in 1866 by Fletcher, Jennings & Co., for the Talyllyn Railway, but to a very different design to that of Talyllyn. He is an 0-4-0 tank engine. In increasingly decrepit condition Dolgoch continued to operate the service single-handedly until 1952 when Edward Thomas became available and was then the subject of a prolonged overhaul between 1954 and 1963. Dolgoch returned to service in late 1999 after a major overhaul involving firebox repairs and an extensive mechanical overhaul. 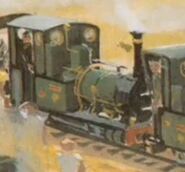 Dolgoch in his green livery 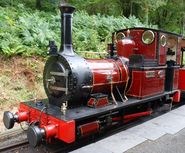 Dolgoch in his red livery
Add a photo to this gallery
Retrieved from "https://myislandofsodor.fandom.com/wiki/Dolgoch?oldid=13756"
Community content is available under CC-BY-SA unless otherwise noted.