Bill and Ben are tank engine twins that work for the Sodor China Clay Company, near Brendam. They enjoy playing tricks and being cheeky to bigger engines.

Bill and Ben returned from shunting some trucks to find that some other trucks they had shunted earlier were missing. Their drivers, after examining a puddle of oil on the ground, concluded a diesel was responsible. After the twins argued over who brought the "diseasel" into the yard, their drivers suggest they go look for the "dieseasel". The twins were horrified at the possibility that the "diseasel" might magic them away like he did with the trucks, but their drivers quickly persuaded them otherwise, and so they set off.

At last, the twins found the "diseasel". While Ben ran behind, Bill confronted the "diseasel" over the theft. The "diseasel" claimed the trucks were his and ordered Bill to "go away"; Bill pretended to be frightened and slunk away With that, Ben ran up and accused the "diseasel" of stealing their trucks, before running back so Bill could run up again. This continued until the "diseasel", under the impression that there was only one very swift and annoying saddletank. When Edward arrived moments later, inquiring as to why Bill and Ben were not shunting, the twins angrily claimed that the "diseasel" had snuck into their yard and stolen their trucks. Edward soon realized what was going on and explained the situation. The twins, embarrassed, apologised to the "diseasel", who asked to be called BoCo.

A few days later, Edward recounted what Gordon had said about branch lines to the twins. The next morning, after Gordon ended up at Brendam after a series of events involving poor preparations and a large floppy green hat, the twins snuck up beside him and loudly recounted what Gordon had said about branch lines. Concluding that the engine beside them could not be Gordon, the two declared he was nothing more than a pile of old scrap-iron, and began to contemplate what they should do, all the while ignoring Gordon's protests, until at last, BoCo arrived. Gordon begged him to save him, and so BoCo threatened the twins to leave with the trucks he had brought. The twins quickly left, leaving Gordon with BoCo.

In 1988, Thomas was sent to work on Edward's Branch Line while repairs were carried out on his branch line. The twins were quick to tease him about his colour, but Edward was savvy enough to send the twins away before an argument broke out.

After Thomas returned to the Yard, covered in dairy from a collision with a farm lorry, the two teased him even more about his new livery. This continued until Edward announced a party of enthusiasts were coming, and threatened that he would not bring them to see the twins. The twins, excited, decided instead to worry about their own paint.

When at last, the enthusiasts did arrive, Edward brought them to Brendam, the twins took them to the China Clay Workings in a brakevan special. A photographer with an "instant" camera began harassing Ben by continuously taking pictures of him, even after the remainder of the crowd went to watch Bill tug a boat into deeper waters. At last, the photographer prepared to take one final picture, just as Bill's driver arrived to ask for assistance. Ben's driver turned on the steam just as the photographer took the picture. The photographer didn't like the picture so, he left it on the ground.

The repairs to the bridge took a long time, and Thomas was still at Brendam when the rainy season came. At The "Drain", a hollow in the land where rainwater collected, the water even began to come near the rails, although no one took much notice. One particularly wet day, as Ben returned from the Workings, the wind whipped the rainwater into a wave which swamped Ben, dousing his fire. His fireman went for assistance, and brought Thomas to help. While Thomas dragged Ben out, Bill took away the trucks. When at last the water subsided four days later and Bill returned to Brendam, the two made a pact to never tease Thomas again.

Bill and Ben were sent to work in the yard. They got to use the turntable as a reward for their hard work. But Bill and Ben were accidentally sent down the same track and they end up buffer-to-buffer. They each blamed each other for the incident and refused to speak to one another. At last, Edward and BoCo lost patience and The Fat Controller heard about the incident. He gave the twins a chance to work together, and sure enough, the plan worked. The twins started to speak to each other again. Bill and Ben sometimes find it dull up at the clay works and they wanted something exciting to happen. They got their wish when a rockslide devastated the quarry. Luckily, Bill and Ben had taken all of the workmen and the foreman out of the quarry before the rockslide.

Later, BoCo couldn't handle the twins as much as he used to, so The Fat Controller had to bring in another diesel, Derek. Bill and Ben had heard from Percy that Derek had a toothache. But they soon found out that Derek really had teething troubles. The twins and Derek had to pull a train the next day, and Derek soon overheated. Together, the twins got the train to their destination. That night, Bill, Ben, BoCo, and Duck talked about Derek all night long.

Salty was sent to work with the twins and Mavis with an important job. When Salty handled the trucks with songs and tales of the sea, Bill and Ben became jealous. They became even crosser when Salty told them stories. Luckily for them, Salty was transferred to Brendam Docks. Afterwards, Ben had to get new buffers, so he was sent to the works. Bill became jealous and his mind drifted away from his work. After some trucks teased him, Bill crashed into a ditch. Ben arrived to rescue Bill and Bill was taken to the Works to be mended.

Some time later, Fergus was sent to help the twins at the quarry. They got tired of his "do it right" attitude. Bill and Ben collected The Rock Crusher from the docks and caused a rockslide. Fergus pushed them out of the way, but the twins returned the favour when they helped him out of the rocks.

Later, Diesel had told Ben of a monster in a tunnel and Thomas had to help him get through it to discover there was no monster. The twins carried Hector to the yards, resulting in them get biffed and bashed by him.

They teased Percy after he had an accident with a mail bag, unaware the pumpkins on their train were falling onto the tracks, which caused more problems for Percy. After the Fat Controller ordered one twin to act as a back engine, Bill reluctantly went to push from behind. Ben ended up derailing near an embankment, and Percy, although he was nervous because he had lost his new lucky charm, helped Bill pull Ben back onto the tracks.

They later played tricks on Connor after racing him and pretending to be faster than him. But, in actual fact, Bill was at the start, and Ben was at the end! The Fat Controller eventually figured this out and sent Bill to be repainted. Bill was upset, which lead to Ben tricking Kevin into letting him be repainted, like Bill. They later teased Harvey about his hook, asking if he was going fishing. This however, ended up helping Harvey to decide what to do when his flatbeds derailed.

Salty told Bill and Ben the story of the Flatbeds of Fear. As Emily told Salty to stop telling made-up stories, the flatbeds rolled away from behind the twins, without anyone noticing.

Thomas was once again sent to work with the twins at the Clay Pits while a bridge on his branch line was being repaired. Bill and Ben ran away from him, and after he caught up, they teased him about being slow. They showed him to a line of trucks, which he was coupled up to. Thomas began pulling them, but did not realise that Timothy was on the other end, jerking the little oil-burning engine backwards. When they went to work for the day, they were almost hit by a landslide, and after Marion found a fossil, Bill and Ben were both very intrigued by the concept of fossils.

Bill and Ben play Guess What's In My Shovel with Marion. They also teased Timothy for being an oil burning engine, but when the Clay Pits ran out of coal, Timothy went to pick up some more. They apologised for their teasing. However, they later sent Timothy on what the Fat Controller referred to as a "fool's errand" to search for a rainbow-coloured truck. Timothy brought back a green truck with several colours of paint on it full of dockyard waste. Bill and Ben were sent to take it to Whiff's Waste Dump as a punishment, as well as being on waste duty.

The twins became convinced that Timothy was no help at all. So when they found out that the Fat Controller was looking for an engine to help at Brendam Docks, they volunteered Timothy. Unfortunately, the twins were too busy messing around to work on their own properly. Luckily, once Timothy was no longer required at the docks, he came back to the Clay Pits to help them clear up the mess.

Bill and Ben made up a game called "Hunt the Truck" and hid a truck for Nia. After Edward made them give Nia her truck, the twins attempted to get revenge on Edward by hiding his truck full of Christmas decorations and presents for Sir Robert Norramby's Christmas party. Edward knew what the twins were up to and took the truck from where they hid it. As a way to give them a taste of their own medicine, he pretended to be worried about losing the truck and how the party would be ruined, prompting the twins to go on a search for it. They eventually gave up and decided to apologise to everyone for what they did, only to run into Edward at the party and realise that he had taken the truck they hid and taught them a lesson on how it felt to have trucks hidden from them. 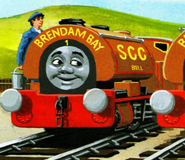 Bill in his orange livery 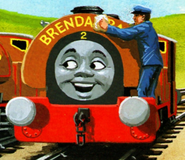 Ben in his orange livery 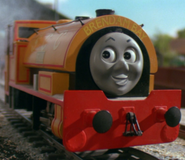 Bill in his yellow livery 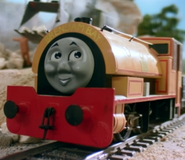 Ben in his yellow livery